Munchkin could be considered the most devious game ever: This is because of how it is played, the people that play it, and the potential friendship destroying wrecking ball that inevitably crashes through your wall when everyone starts to back stab each other in an old west saloon style shootout with cards flying around the table like bullets… where was I? Oh yeah, Munchkin!

There are a few things about this game that I love, from the design to how people actually play, but; before I get into that I feel like I actually need to talk about one particular aspect of the game that needs to be addressed. 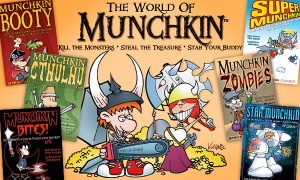 There are a ton of different versions of Munchkin and none of them are wrong to buy. Seriously pick a nerdy fandom and you’ve pretty much got a version of Munchkin for it. The vanilla Munchkin is pretty much a tongue and cheek DnD while there are other versions like “Space Munchkin” that plays with sci-fi themes, and they even have the Night Before Christmas and Cthulhu versions. I personally own three different copies of the game because every version is fun in its own way and offers a unique rule or two that affects the game.

Alright, now that we have that out of the way let’s get into what makes Munchkin so great:

I think that any board gamer casual or otherwise could benefit from any copy of Munchkin in their board game closet and the best part is that this game is in almost every game store you could think of. You really can’t shake a stick without hitting a copy of Munchkin. It’s really a pick your poison kind of thing. Just find your genre, pick up the copy, and have fun with up to 6 people. It also makes a great nerd gift!

Visit our homepage for details about our MUNCHKIN give away

Or get your own copy of Munchkin

We would really like to hear about your favorite copy of Munchkin or maybe another game that you like. Be sure to share the article at the bottom of the page, hit us up on Facebook and Twitter @nblogcollective, and leave a comment while you’re down there. Have any topics you want us to tackle? Shoot us a message using our contact us page!