This past week I was asked to write a review over Crafty Game’s “Mistborn: House War” and their RPG as well. Considering that it take a little more time to fully digest an RPG I decided to go over the board game itself. I personally enjoyed the game and I’m happy to include it on my board game shelf.

“Mistborn: House War” is a political game that has players managing “Problems” with their resources in attempt to keep the Final Empire on its feet, or to bring it to its knees. Each phase of play revolves on the various problems plaguing the empire such as starvation, rebellion, and the heroes of Mistborn trying to ruin your life. Players work together as various major noble houses of the Mistborn setting, but there can only be one winner and this is the crux of the game. If it was just resource management alone that would be a challenge, but as you play you will have to negotiate with the other players over victory points and resources spent in order to via for favor with the emperor, or to crush him. 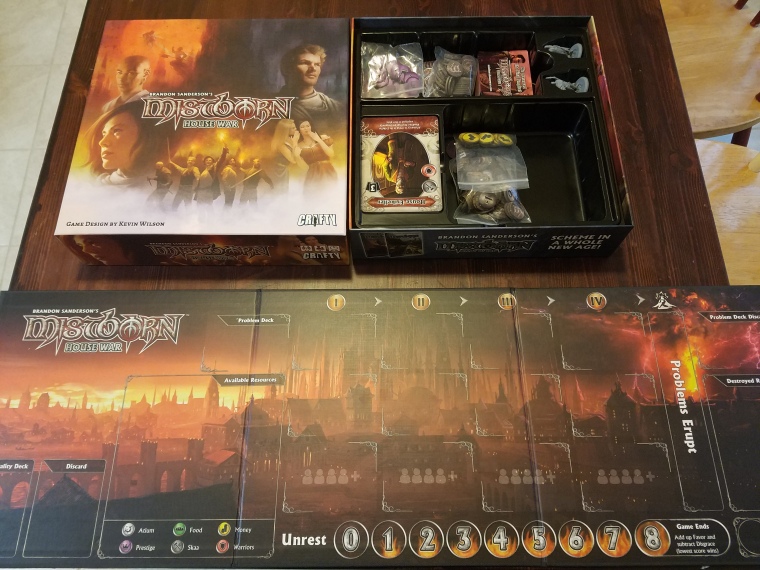 The rules in this game are pretty easy to understand and it even has a quick rule guide to help new players to the game. There is also a player round reference on the back of your noble house card to help players. There are three major phases.

The details in the game are what really pushes players to negotiate. For example, some problems that explode will only affect one player, so in order to get that problem solved that player may have to negotiate a large amount of resources or victory points to take care of themselves. Other times it will be a no brainer and players will work together to fend off certain destruction. The other trick of the game is that there is no way to fall behind. Players can win by earning disgrace (the opposite of the normal victory points) and cause the Final Empire to fall by causing unrest. Unrest being the scale that tracks the Final Empires health. With the anti victory being another victory condition there is no such thing as last place in this game. Clever players can use their seeming failure to win the game by crushing his opponents with subterfuge and cunning.

Mistborn has other game elements such as personalities that allow special actions and mitigation of resources that can be used to spice the game up just a little bit more. Honestly though there’s a lot to like about this game. I love the player interaction in this game and the fact that a lot of the problem cards are more of a question of how do you want to be hurt rather than getting rid of all threats. Players have to make strategic choices about what resources, personalities, and unrest that they want to sacrifice in order to succeed. This means that any honorable victory will be by the skin of your teeth. Playing the game though did have one or two bumps.

People who play Mistborn have to be able to negotiate. This isn’t your dad’s Catan and you’ll be talking more about long terms strategies and playing things close to your chest. The players have to be ready to be sneaky and maybe even a little tricky.

It plays better with more players. In my three player game one player had a card that allowed him to increase unrest relatively easy. Instead of just killing that card I decided to compete for the fail victory and our third player was left a little jaded being ganged up on very easily. With games that have more players you will find that the game balances more, and even if there is only one winner at least you probably will not be ganged up on.

Other then that this game was so much fun. It holds well to the Mistborn lore and the flavor captures that feeling of being the evil house noble looking to outmaneuver your enemies. Everything came together really well with me and it hits all of my bullet points for a good long game.It stores well, has great components (minis, sleek cards, thick cardboard) it has player interaction, offers a great challenge, and is short enough that if it’s game night you will probably end up playing again.

Thanks for reading my article about Mistborn: House War. If you liked this article then be sure to check out our other posts with the links below. Be sure to follow us on Twitter, Facebook, and Patreon as well. I’ll hopefully be able to run a game about the Mistborn RPG soon so be on the lookout for that, and as always,

House War. If you liked this article then be sure to check out our other posts with the links below. Be sure to follow us on Twitter, Facebook, and Patreon as well. I’ll hopefully be able to run a game about the Mistborn RPG soon so be on the lookout for that, and as always,