I’ve been waiting a while for the new Genesys game to come out by FFG. A narrative focused universal RPG that uses the Narrative Dice System (NDS) is exactly what I needed in my life during the week of college finals! Due to my lack of self control I have the great opportunity to give you a great review on the game itself.

I have to say for starters this book is made to last. The paper is very thick, acid washed and hard covered, it is worth the price at fifty bucks. The artwork itself in the book is, like all of FFG’s work, beautiful. Scenes are set of tense moments, cool characters, and amazing pieces of technology that are all not completely finished. The art sets the mood of the book that there is a potential to make an amazing setting and that the groundwork is there but it’ll be up to the GM to complete these scenes and settings. My only problem is that some of the Sci-Fi art looks very… VERY Star Wars inspired. That being said it’s very obvious that a lot of love and care was put into the creation of this book. 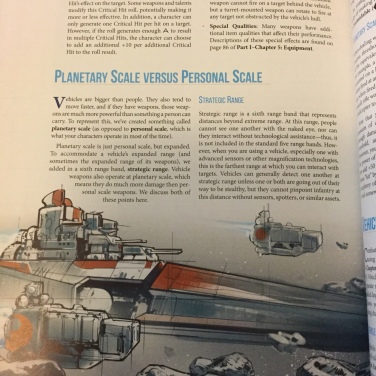 Having a first edition always comes with it’s spelling errors and whatnot but I did not really get any of that here. I think so far I have found maybe one spelling error, but the language in the book is well written and phrased. A lot of times in RPGs you can tell when the makers of the game hit a part of gaming that is their pet peeve through the language used. I always think games that avoid this show a real professionalism and as far as FFG goes they are pretty good at this. There is of course bits about official RPG behaviors like dice etiquette and the such. There’s also warnings about GMs considering what their players are capable of handling in ways of describing trauma or conflict. All in all the book is well written and easy to read.

The difference between the Genesys system and the Star Wars FFG RPG is big enough that I had to definitely put some time into reading the new book. While the NDS is still the same at heart (the symbols are different but the dice are the same) the concepts and ideas that Genesys has is vastly different from Star Wars. First off, no matter what setting you choose in Genesys it is purposefully made uncompleted so that the GM can make and populate their worlds with their own unique creation. Each of the settings gives you a minion (lowest level adversary), a rival (medium level adversary) and a nemesis (the highest level adversary) so that the player can see the kind of feats and skills each level enemy should have. Beyond that the GM has to populate the creatures they want or need themselves. This is easy enough to do with their new rules, but more on that later. Along with enemy profiles GMs will get a light inventory that helps inspire GMs with setting specific items relying on the creativity of the GM. along with Items and enemy profiles GMs can expect a light setting detail that relates to in house FFG settings (my favorite is the Twilight Imperium setting for the Space Opera) along with common themes to each setting. This is all done on purpose and I’m not going to lie the GM has most of the responsibility of creating content. If GM’s are looking for a quick setting to learn this may not be the best game for them, but if you are looking for that special and personalized setting to be in a medium crunch narrative system then you have found your game.

Genesys makes potential world builders aware of specific worldbuilding steps such as in game Themes, the extra rules involved with creating unique settings (such as horror game rules and giant robot flying rules), and also creating abilities and powers involved with the unique setting you make. I personally love how customizable everything in Genesys is and I think it will lend to me having a setting that is unique and that I love.

There are some issues with the Star Wars games that Genesys has addressed and also some things that they took away that should not have been (in my opinion). The first of these things is that now there is some loose encounter guides in this book. The Star Wars games gave no indication as to what the appropriate force to apply to PCs was. Now there is a very basic rule of thumb guide to help GMs along other than just feeling out how many bad guys there should be. One thing that I did not like was that there are no longer any skill trees like in the old game. The way that the new skills are dispersed is more in a pyramid scheme. A player needs two “level one skills” to get a “level two skill” and two “level two skills” to get a “level three skills” and so on. In this way players should feel a natural power progression, and I think I might just make my own skill trees based on this rule to help player XP point focus, but the skill trees of old are gone now. The rules for extra things such and fear and vehicle driving borrow heavily on the Star Wars games and the magic rules are wild!

Magic is not too complicated for the game and stand in that middle crunch zone just like everything else. Basically there are three schools of magic (arcane, divine, and primal) and 6 different types of spells. Each spell type can only be used by certain (and overlapping) schools of magic so that no one is overpowered. Spells cost stamina so that players can not abuse the powerful nature of spells. As characters progress the issue of stamina will be less and less of a problem.

All in all with the additions that Genesis made to the FFG NDS I’m surprised with everything that we were given in the book. I personally think the this game is a good addition to the RPG community and suggest the buy for anyone trying to get their own personal creations out on the table.

Thanks for reading my article! If you liked it please share with the links below and give us a comment. You can follow us on social media as well on Facebook and Twitter @nblogcollective. We also have a Patreon page with a couple of cool rewards for backers. Good luck making your own settings and as always,