Tiny Epic Quest is a one to four player game that is part dice roller and part strategic placement. Each player controls three meeple that are capable of holding weapons and other items that grant your team bonuses. Each player has to move their meeple strategically in order to complete missions, kill goblins, explore dungeons, and learn spells. Each of these objectives will give you different scores. From there it’s easy because the highest score wins the game. There’s lot’s of things to love when it comes to Tiny Epic Quest and it is honestly the first game that I prefer with less players!

Let’s talk about this ‘less players’ things first. Most games get better when you add more players, or at least for me that’s the case. I like using all the chips in SPLENDOR and Catan basically has to be a three player game AT LEAST. Tiny Epic Quest works much better with two players. The reason for that is the movement rules of the game. No matter how many players you have in the game the whole group has to share four move actions. This means that if you are playing with four friends you can only move one of your meeples per turn, but if you are playing with two people then you each get to move two meeples. This seemingly small change actually changes the pace of the game dramatically. Having more moves allows players to accomplish more goals, and this means the meeples get more item, and it’s way easier to score points in the game. This makes the game more fun to me because the points are higher, the strategy changes, and the items change elements of the game. I like playing with the more powerful heroes and using all the cool stuff, so I actually prefer two players over more at any time.

Now that we’re done talking about that we can talk about other fun parts of the game like the different game elements. One of the fun things about this game is all the different things you can do. Players have so many options, like learning spells, or collecting epic weapons. Most of the options that players choose rely on dice rolling at the night phase to see if you succeeded in your goals. My favorite tile is the Mushroom Grottos though. These particular tiles affect the game by giving your meeples various boons like gaining health or energy. It’s hard to ignore the bonuses that the Grottos give you. For anyone playing their first game all I can say is using the move a meeple three spaces Grotto and then the gain two hearts per meeple out of the castle is a good idea.

Another important aspect to this game is that it’s modular. I really like modular games because it keeps players on their feet, especially in games so dependent on strategy. If I was playing Risk I already know basically what my strategy is befor I even start playing the game. I’ve played most risk boards enough that I don’t actually have to worry anymore about things changing, and I even have strategies for most of my friends that I regularly play with. Modular tiles for games change up strategies at least slightly and that is a good thing. Sometimes when the board is laid out in a certain way you may not be able to reach certain areas in one turn. That plus the Mushroom Grottos being put in random different places really changes things up.

One of my favorite, and least favorite parts of this game is the pieces. There’s so many cool little pieces to this game that it is unbelievable. Everything has this ‘Legend of Zelda’ vibe from the old Nintendo games that make me feel that light happiness nostalgia. All of the cards and tiles are beautiful, if not a little hard to line up. Anyone with OCD sensibilities may have a hard time lining up the roads and rivers and they’ll have a hard time putting it up too. There’s a ton of pieces to this game with 24 meeple sized weapons, tokens and cards for each player, and even more tokens and cards for initiative, magic counters, and goblins. The box comes with a ton of those board game bags to take care of everything. The best part for me though was the weapons rack! It’s a cute little wood looking rack made out of cardboard with little pinholes that can hold the weapon. It can be difficult getting weapons on and off of the weapons rack but I love having them all on there instead of in a giant pile. This way players avoid having to find a needle in a large pile of weapons. 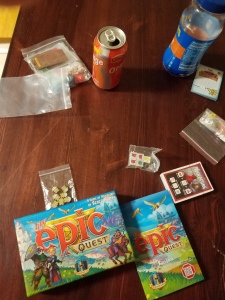 As for the general replay value I think Tiny Epic Quest has some serious potential. I usually end up playing this game two or three times when I bring it out. With about an hour per game I can easily spend a mild gaming session just on this game. I don’t have much experience with the other Tiny Epic Games but this one is very fun.

Overall this game is fun and thematic. Not only that my wife really loves to play and since she’s really cool I love picking up games that I can play with her. I think that Tiny Epic Quest is a good game for anyone to pick up.

Thank you for reading about Tiny Epic Quest and we hope you enjoyed the review! Want us to review a specific game? Check out our Patreon page by clicking here. We have a voting system setup for picking what games we review next. Also be sure to follow us on Facebook and Twitter @nblogcollective. If you liked our article you can share it with the links below and as always,